According to Finnish Russian Civic Forum, there were a demonsration against war criminal Putin during the visiting of Putin in Helsinki on June 3,2009.

The war criminal and Russian Prime Minister Vladimir Putin did an official visit to Finland on 3 June 2009. So the most well known human rights activists of Finland joined a demonstration against Putin. The  joint demonstration of the Finnish-Russian Civic Forum and Amnesty International greeted Russian Prime Minister Vladimir Putin in Helsinki on 3 June 2009. The demonstrators reminded Putin of the situation of political prisoners and freedom of speech in Russia.

The demonstrators demanded that Finnish Prime Minister Matti Vanhanen and President Tarja Halonen condemn the repeated violations of human rights in Russia. Finland, as a member of the EU, needs to exert more pressure on Russia on human rights.

“We call on the Finnish leadership to summon up its courage and demand that Russia end human rights violations and government-sanctioned violence,” said Ulla Hakanen and Salla Pyykkönen, members of Amnesty’s Russian coordinating group.

“The situation of political prisoners in Russia is reminiscent of the Soviet Union in the 1980s, when dissidents were sentenced under false charges,” said Heidi Hautala, chairperson of the Finnish-Russian Civic Forum. Human rights need to be on Finland’s foreign policy agenda, she said.

“I was simply amazed when I read the Finnish President Halonen’s comments that Putin has created stability in Russia. Putin has quelled practically all opposition in Russia, so his actions cannot in any way be regarded as exemplary,” Hautala said.

Some photos from the demonstration which taken by Ville Ropponen: 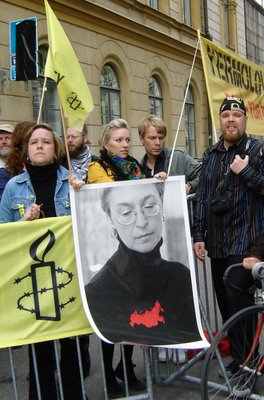 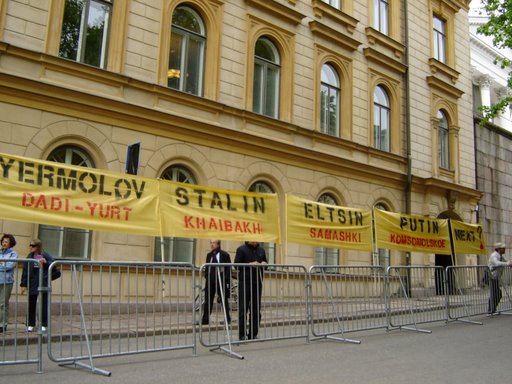