News
Home›News›Polish MP and His Initiatives Against Chechen Refugees

Polish MP and His Initiatives Against Chechen Refugees

Few weeks ago Polish MP Lech Kolakowski (from Kaczyński twins’ party: Law and Justice – PiS -Prawo i Sprawiedliwość -) wanted Office for Foreigners to close the refugee camp in Lomza city of Poland. After his statement two Chechen women were attacked in the Lomza street. Internet forums connected with Lomza were full of racist texts. And they still are.

During the press conference that was held on Monday, MP Kolakowski said his initiative had nothing to do with racism, he only wanted to help (sic!) refugees by moving them all to other towns. He also presented the answer he got from the Office of Foreigners. The letter described the refugee situation in Poland, and helping programmes. The Office informed that refugees in Lomza have been enrolled in a guidance program that shall lead to independence and integration with local communities. It was developed by Podlaskie area authorities with cooperation with many bodies and institutions, also ngos. MP Kolakowski was encouraged by the Office to take part in actions that would help integration and would exclude such radical moves like closing the camp.

Kolakowski was deeply disappointed with the letter. He said: “Refugees are treated in a wrong way with the legal regulations we have now. We must change those regulations. We have to give them the opportunity to grow, to develop, to live where they want to live, ie. EU countries that are richer.”

It looks like Kolakowski advisers have done really good job changing his racist talks into a will of help. But what he really says is: “Chechens go away from Poland!”. What is easy to understand when Kolakowski is concerned, especially when one looks at his interpellation to Minister of Home Affairs that was written in June and ended with the words: “What kind of action are you going to take to eliminate unfair Chechen refugees who want to get a status of tolerated stay based on fake documents that they have bought in Grozny?”

Well, it looks like Kolakowski has a kind a problem with Chechens… Is it legal in EU country to act in such way while being a MP? I am being sarcastic now but seriously… that person seems to be a real redneck and he will not be of any help for the refugees. 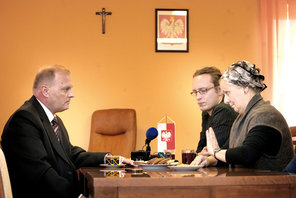 The truth is there might be many Chechen asylum seekers who want to live in other European countries. But there are also many of them who want to live in Poland. There are some reasons they mention: Poland is closer to Chechnya, Polish landscape with forests and bad roads is similar to that one in Chechnya, and blocks of flats with their infrastructure reminds many of them “home”. Also the language is easier to understand for those who speak Russian.

Changing the EU regulation is a work for years and during that time Chechen and other refugees have to live in Poland. So local authorities have to do everything to eliminate racist talks and acts. Together with The Office for Foreigners they’d better to start listening to refugees themselves.

There was a project condcuted by Society of Crisis Intervention (Towarzystwo Interwencji Kryzysowej), organization based in Cracow, which aim was to “let the others to talk”. The project was focused on women, refugees, migrants, minorities. There will be a book of their stories published soon. But what is the most important is that this project showed what can be changed in law and other areas to make refugees live in Poland easier, better, safer.

People from that Society, together with Chechen women living in Lomza, have prepared a special document with clear proposals of great and easy to make solutions. The letter was send to The Ministry of Home Affairs soon after the attack on women in Lomza. Till now the only answer was that it was sent to the Office for Foreigners. We are waiting for their answer – will Polish authorities do something about refugees or they just do not care!

Russia is At the Bottom For World ...