Musa Aushev: Nothing is Known About Investigation

Even though the investigation is under personal supervision of President of Ingushetia Yunusbek Yevkurov and Russian Public Prosecutor Yuri Chaika, nothing is known so far about any progress in investigating the kidnapping attempt and subsequent murder of Ingush human rights activist Maksharip Aushev.

“I know nothing about any actions of law enforcers on Maksharip’s case. I wasn’t summoned or interrogated any where,” said Musa Aushev, the casualty’s brother, to “Kavkaz-Uzel” correspondent. 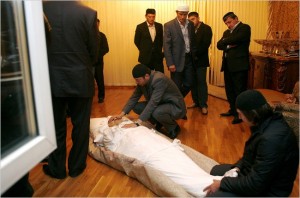 “As to the day, when Maksharip was assassinated, the video records from the STSI (State Traffic Safety Inspectorate, known as “GAI”) post at the entrance to Kabardino-Balkaria were handed over to the investigation,” he has noted. “At first, militiamen kept saying that the day was foggy, and nothing could be seen in the records. Only when Evkurov gave a personal order, the records were delivered. However, we know that on that day two cars were parked near the post – a black Priora and a silvery Zhiguli-99, – both stood directed towards Nalchik. People saw these cars; these cars were without state number plates,” Maksharip’s brother said.

“As to the attempt to kidnap Maksharip – everybody knew about it. And we, all the relatives, told him many times: leave Russia, at least for a while; wait away for some time. Everybody – his father, mother, wife and children – told him about it, but he wouldn’t listen. He always insisted that people should know everything; and everything should be fair,” Musa has added.

Statement of Russian NGOs About Chechnya