During the last weekend, Chechen wrestlers in Europe particapated to two championships and got successful results.

In every year, the border regions of Belgium, Germany and Netherlands organize a wrestling tournament which name is “Border Tournament”. This year the tournament was organized in Düren town of Germany on 29 November. 70 wrestlers, from 6 to 18 ages, participated the greco-romen style wrestling tournament. The Belgian sport club “Raeren 2006” attended and six wrestlers of the club were Chechen. Chechen wrestlers got successful results, four of them occupied the first place and two of them to second place. 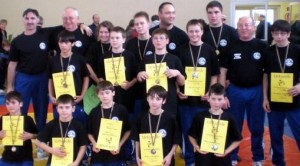 In the 34 kg weight category, Zapir Yusupov became champion and gained the golden medal. Dzhokhar Gambulatov, Zapir’s teammate and rival at the final game, got silver medal. In the category of 38 kg, the champion was Imam Vagapov.  In the 42 kg Abubakar Tutaev won golden medal; however his teammate Islam Saidulayev got the silver medal. And Zelimkhan Dzeiytov became the champion of 63 kg category.

In the 74 kg category, Adam Aybuyev occupied to second place and won the silver medal. He fought very well howeve in the final game he lost against a Canadian wrestler with 2:2 – 5:2 (Adam won) – 0:3. In the same category Imran Abayev was our another contender, but he lost in the 1/8 finals and became 8th.

Muslim Saypulayev competed in the 96 kg category. He started very good to tournament but unfortunately in the final game he lost against a Turkish wrestler with 2:0 and 6-:0, so he won the silver medal.

In the category of 60 kg, Zaurbek Khadzhiyev, a member of French junior national team, won the bronze medal.

Chechen Activist’s Killing “Had Not Connected To ...