With Andrei Babitsky I met in the first war in 1995. He arrived in Ichkeria which was already in full swing in the war. It was in the Vedeno region where the position of the Chechen armed forces were located, above the Baku-Rostov highway.

The town was already in war and it gradually turned from a classic war defense front to a guerrilla war. We stayed in one of the villages of the Vedeno area when journalists from different agencies came. There were Nicholas Tapuriya, an AFP correspondent; and Babitsky, from Radio Liberty.

The situation of the Armed Forces of Ichkeria was critical. Every week we had to defend positions under pressure from hundreds of times superior Russian forces. In this situation, few journalists risked their lives to go to highland villages. But Babitsky came. With him was his teammate named Yevtushenko. They spent a night with us,

Next morning, we agreed to go to Vedeno, to the main headquarters. But the morning started with Russian air bombings. They bombed the road, and the trip was dangerous.

Early in the morning Babitsky started to wake Yevtushenko saying:

Yevtushenko tried as much as he could to postpone the departure, but still he had to go. Air strikes had no impact on the planned schedule of visits

During the first six months of war, I saw a lot of journalists and humanitarian workers. Often they come to the Chechen side of the front during interruptions in fighting. They always tried to get more information than could be interesting for a journalist or humanitarian workers. They were particularly interested in whether there was a psychological breakdown in the Chechen resistance.

Andrei very different from those journalists. He was interested in what happens in reality. What for and why Chechens fought in a hopeless war. To say the war was for independence is to say nothing. 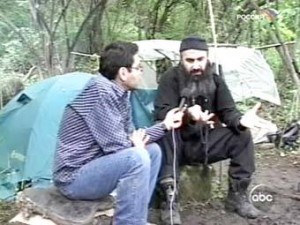 Babitsky was not biased against the Chechen resistance. And that made him different as a journalist from many of his colleagues. I can’t say that Andrew shared the ideology of the fighters of the Ichkeria’s armed forces but that is not needed in order to be an honest journalist.

The hatred of Russian secret services and nationalists towards him is explained by his position of impartiality. They did not pardon Babitsky for not being a Kremlin journalist, for not praising Russian soldiers for destroying “gang of mercenaries” for the glory of Russia.

They expressed their hatred in the comments to the article by Babitsky who described a few days he spent in a KGB prison. These people worried only about eating would never understand those who risk for truth and give life for an idea. All they need is some material profit. So is their mentality.

Some of us stood in the street when suddenly we heard a loud whistling in the sky. I thought that we shot down another Russian plane and it is falling on us. In the next moment, we fell on the ground, then there was a terrible explosion, and earth mixed with broken bricks fell on us.

When it was quite we ran to see what happened. It turned out that a massive bomber dropped a bomb on the school which was the main headquarters. The explosion broke the four-story school building into two parts. A third part in the middle was completely missing. Babitsky’s wrecked car turned over. It was completely destroyed and unreparable.

Andrew and Yevtushenko went back, all covered with red dust from broken bricks. On the face of Andrew there was no fear, although it was only a miracle that saved him. They missed the explosion being only a few minutes late in arriving to the scene. Andrew felt very sorry about his car turned into a heap of iron.

Why do I recollect all this and write about it? As I said earlier, many journalists from different countries went to cover the Chechen war. Sometimes, some journalists asked the soldiers to shoot into the air for audio recording. First, we did not know why they needed it. But later it was found that editors paid more for reports directly from the fronts, with shootings. But Andrew was not of that kind. 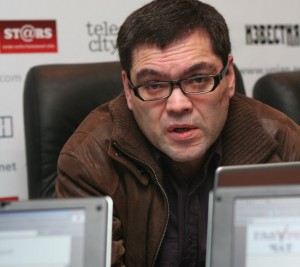 Babitsky was arrested by the Russian military and was nearly murdered. He was arrested to declare him missing. Later the Russians would certainly accuse “militants” of his murder. But it happened so that they could not conceal his arrest, it was widely reported in the media. Only that prevented the KGB (FSB) to kill him. And instead of just releasing him, they organized a cheap performance of exchanging him, a Russian citizen, for another Russian citizen held by the Chechens.

I would like to say to the people commenting the article by Andrei that he wrote in the prison. You, “Internet heroes”, never saw the scene of war, not even in a dream, so shut up.

Babitsky was a new “Hostage of the Caucasus” versus an old one, a hero in a story by a Russian 19 century classic writer Alexander Pushkin. He took part as a reporter in another Russian war against the Chechen people. Being imprisoned for a few days by the KGB, he saw he got a glimpse of how Chechens are treated in these prisons. There are few who survived, not more than one percent of those arrested by the Russians. Most died under terrible torture. And what the Russians do now with tens of thousands of Caucasian Muslims in their prisons, only Allah knows.

Musa Aushev: Nothing is Known About Investigation