Articles
Home›Articles›Brothers, Bread and the Bosphorus

Brothers, Bread and the Bosphorus

Most of the 1,500 Chechen refugees who have been living in Turkey for years are yet to be given official refugee status by the Turkish government. Without that status, they are not permitted by law to have a job or attend schools in the country. The refugees, many of whom had to flee Russia’s wars in Chechnya, are pushing Turkish officials to grant them those rights. But as Imran Garda reports from Turkey, there may be a political motive that has kept Turkish officials from making the move.

The stocky, powerful man, in his 40s settled into his seat to begin our interview. We were in or around Istanbul at a location I had promised not to mention.

“Umar Israilov was killed specifically on the orders of Kadyrov …” he told me.

Many Chechen rebels have been gunned down on the streets of Turkey in recent times.

Did my interviewee fear for his own life, I asked.

“You have to be careful but not be afraid. Because death will come whether you are scared or not,” he told me.

I was talking to Vakha Umarov, the brother of the man who claimed to be the mastermind behind the Moscow metro bombings in March. He wore a pink t-shirt that seemed odd for the occasion.

Officially, he assured me, he has nothing to do with the rebels. His brother Doku, who he looks remarkably like minus the fist-length beard, is the self-proclaimed “Emir of the Islamic Republic of the North Caucasus”.

But does he support Doku and his dream of complete independence from Moscow and an Islamic state across the Caucasus?

“We didn’t start this war … The end will be ours. Because if Doku is killed, he will go to paradise … The fact is, he is fighting for truth.”

I had heard from various reports that Vakha was looking after Doku’s six children. He confirmed that to us, and more.

Doku’s daughter, far younger than ten, with her father’s features etched on her headscarf-framed face was in the apartment as we conducted the interview. Doku’s wife was just next door.

And what about the Moscow bombings, which indiscriminately targeted civilians, were they justified in Vakha’s eyes?

“If we are going to talk about justice, those two blasts in the Moscow metro killed only 40 people. During the second Chechen campaign only, over 45,000 children alone were killed.”

I was also intrigued about a claim he was alleged to have made to a journalist in January. There he said weapons and cash find their way to the Chechen rebels from the government of Ramzan Kadyrov.

Kadyrov, the leader of semi-autonomous Chechnya, is a strong ally of Moscow, and has been at war with the rebels.

When I ask him if fighters are being trained and sent from Turkey, he chuckled: “Here the Chechens only think about bread.”

Located innocuously under a mosque in Umraniye, Istanbul is a Chechen refugee camp.

Pale round-faced toddlers ran around with plastic toy guns, similar to the toy guns we saw the children at Vakha’s house playing with, laughing as they “shot” at each other.

We were just in time for a delivery of bread, rice, pasta and other staples that were being delivered by the Turkish humanitarian organisation IHH.

Among the residents we met while filming, happily receiving his box of supplies, was former Soviet pilot and veteran of the first Chechen war, Albert Himoy. 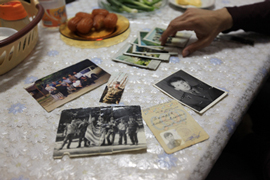 He was happy to show me his favourite photographs from the days when he flew planes for the Soviets, and then later when he took up arms against Russia as Chechnya agitated for independence after the Soviet Union disintegrated.

He said he had left Chechnya before the second war erupted in 1999.

Albert has Popeye forearms, piercing eyes and is clean shaven. He asked why I had not taken the time to shave for my camera appearance – deliciously ironic because, given the staunch religious observance of the subjects of my report, I had thought that keeping some stubble was the polite thing to do.

Albert alleged that the refugees face bittersweet hospitality from their hosts and live in a state of limbo.

As far as definitions go, he was right.

While Turkey takes them in, and allows them to live in the country, the Chechens cannot legally work here or send their children to school. They are not legally defined as refugees.

While Turkey is a signatory to the UN’s 1951 Refugee Convention, a geographical clause that Turkey adheres to effectively rules the Chechens out of gaining official refugee status.

Albert claimed to have written to not only the UN, but also to Recep Tayyip Erdogan, the Turkish prime minister, and Abdullah Gul, the president, imploring them to grant official refugee status to the Chechens.

He rhetorically lamented: “Who are we? We have been ignored. We have no status here. No future here!”

A View of the Bosphorus

We later found ourselves standing in Fenerbahce, wedged between some prime real estate.

In front of us we gazed in awe at the stunning turquoise waters of the picturesque Bosphorus river. Behind us, the crudely constructed homes of a Chechen refugee camp, which houses around 200 people.

More bread and other handouts like second-hand clothes were being trucked in.

It was a busy week for IHH, the Chechen women grabbing the aid as soon as it arrived and while some stood around to count their blessings, others scurried for their makeshift kitchens.

The camp was gritty and slum-like. The walls were riddled with scars. So were the people. We saw one-eyed men, even legless men. They were hesitant to be filmed, uneasy to talk to us. But why?

“When we appear on TV, our friends and family at home in Chechnya tend to disappear,” one told us.

They hated Kadyrov, his name was a dirty word here. Just mentioning it created paranoia and suspicion.

They also hated being in Turkey, without rights and documentation.

Another old man, camera-shy but bold and blunt off it, spoke frankly: “In Turkey even the dogs have to have identity tags on their collars. But not us. Not the Chechens.” 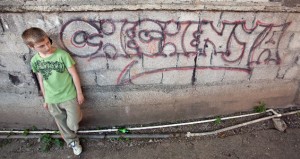 Then there was 13-year-old Aslambek Abuyev, handsome and sprightly – definitely not camera-shy. His dad gave him permission to be interviewed.

Aslambek has lived in Turkey since he was three. Fluent in Turkish and expressing adoration for football star Alex and the Turkish club the Brazilian plies his trade for, Fenerbahce.

“Aslambek where is your home, Turkey or Chechnya?” I asked him.

“Chechnya of course,” he scolded me.

“What do you want to be when you grow up?”

He looked towards the older camp residents, paused, hesitated, nodded and locked his eyes back on me.

Dudayev was Chechnya’s first secessionist leader after the collapse of the Soviet Union. He was killed by two Russian laser-guided missiles in 1996.

Not far from the camp, in a concrete apartment block within Istanbul but, like Vakha’s house, in a location I was requested not to mention, seated across from me was Jennet.

“It is good to live here, Alhamdulillah [praise be to God], and difficult to live in Chechnya,” she said.

She was covered from head to toe in a black Saudi-style face veil and cloak, with even her delicate eyes behind a light fabric.

Jennet’s husband Moosa was killed in a joint special operation by Russian, Chechen and Ingush forces in Arshty in February.

In a Youtube video, it was that specific operation which Doku Umarov claimed he was avenging when he ordered the Moscow metro to be bombed.

Once again gorgeous children buzzed in the background playing with plastic toy guns.

A total of seven women and 15 children live in the flat – all of them widowed and orphaned by the loss of a fighter.

It is not five star accommodation, but it is not a refugee camp. The style of dress that each woman wore, the full niqab, also distinguished them from the women in the camps who did not cover their faces and suggested, rather than increased religiosity, that the widows were afforded an elevated status within the community.

After two devastating wars and ongoing instability in the North Caucasus, the Chechens we met were weighed down by pain and anger.

They saw it as their historical and religious right to resist Russian rule, and not to accommodate it, as Ramzan Kadyrov has.

During the countless cups of tea we shared with these refugees – one of our hosts told us “sit down and drink, we don’t even let our enemies leave without offering tea” – it never took long before we were reminded of how Joseph Stalin deported the entire Chechen population en masse to Siberia after the second world war.

These Chechens find their home, for now, in Turkey, which tries to straddle duel and conflicting responsibilities.

It has increasing energy and economic ties with Russia, the country that provides two-thirds of its natural gas, and it is under pressure from Moscow to crack down on any Chechen groups within its borders.

But Turkey is a resurgent, confident influence in the Muslim world and is keen to be seen as having provided a haven to oppressed Muslims. It is at these crossroads that the Chechen refugees (who are not even called refugees here) find themselves.

Jennet was pregnant when Moosa was killed. She fled to Turkey and gave birth to a boy, Huzayfa.

I asked her if she wanted to stay in Turkey.

She told me: “I will live here in Turkey until my son Huzayfa is 15. Then I will send him on Jihad to Chechnya.”