The Eleven Annual Report of the U.S. Government Commission on International Religious Freedom released on April 29, that describes puppet regime in Chechnya as criminal and recommends institute a visa ban and freeze the assets of ringleader Ramzan Kadirov.

The reports states that situation with religious freedom in Russia (page 281 of the Report) continues to deteriorate. For example, in 2009 the government of this country increased its use of so-called “anti-extremist” legislation against religious groups that are not known to use or advocate violence.

Among recommendations to the Government of the United States to curb Russian violations of religious freedom (p. 281 of Report), the Commission proposes: “Russian national and local government officials harass Muslim and other religious groups they view as non-traditional for Russia, the report says. The harassments of these groups include: denials of registration and refusals to grant permits for renting places of worship.”

Continued high levels of xenophobia in Russia, which results in violent and sometimes lethal hate crimes, are also mentioned in the report.

The Commission recommends to put press on Russia to reform its overly broad law on extremism.

“The US also should institute a visa ban and freeze the assets of Ramzan Kadirov, gang leader of puppet regime in Chechnya, due to his leadership of the Chechen gang forces, which the European Court of Human Rights (ECHR) has found involved in severe human rights abuses”, says the report of the Commission. The report also attracts attention to the plan of bloody puppet regime that opening so-called “Chechen Cultural Centers” and urged to Western Governments not let them. 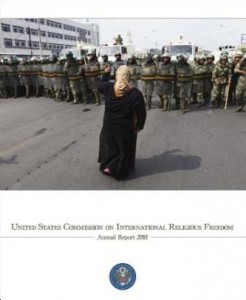 “This sharp deterioration in the human rights climate appears to be a direct consequence of the authoritarian stance of the Russian government as well as the growing influence of chauvinistic groups in Russian society”.

The following is among recommendations to the Government of the United States to curb Russian violations of religious freedom (p. 281 of the Report): “The US should implement the “Smith Amendment” of the 2010 Consolidated Appropriations Act to prohibit US financial assistance to the Russian Federation government due to its official policies on religious groups, particularly its wide use of the extremism law”.

The report speaks about “popular dissatisfaction by Muslims with the local and national Russian government” (p. 282), the persecution of Muslim prisoners for their religious beliefs, sharply criticizes the list of literature_ which forbidden for reading by Russian citizens and includes a large number of Islamic books and publications (p. 283) In particular, these are the book “Message of Light” by Nursi and the Russian ban of the Muslim organization Tabligh Jamaat.

In addition to the brutal persecutions of Muslims, which is the main place in the Report, the US Government Commission points mentions political repressions in authoritarian Russia against Jehovah’s Witnesses, the Lutheran Church, Evangelical Christian Baptists, the Russian Orthodox Autonomous Church.

The Report focuses (p. 289) on obstructions by the Russian authorities in the field of religious education and restrictions against foreign religious workers (Catholics, Protestants, Muslims, Buddhists and Jewish).

Recommendations to the US Government to combat Russian violations of religious freedom:

1. To urge at all levels the Russian government to undertake reforms to ensure respect for international norms on freedom of religion or belief;
2. To implement the “Smith Amendment” against Russia;
3. To maintain a mechanism to monitor the situation in Russia;
4. To organize regular roundtables with members of the National Security Council on the status of freedom of religion or belief in Russia;
5. To ensure that US government-funded grants to NGOs in Russia;
6. To support programs to train Russian lawyers to fight religious persecution in Russia;
7. To translate into Russian and make available, including by posting on the US Embassy Web site, US Federal Bureau of Investigation and Department of Justice information relating to international standards on freedom of religion or belief;
8. To ensure that Russia’s citizens have access to US government-funded radio and TV broadcasts, as well as Internet communications, including information on freedom of religion or belief;
9. To return (in full) the Russian service broadcasts of the Voice of America;
10. To restore the previous (the period of the USSR) levels of Russian-language radio broadcasts of Voice of America and Radio Free Europe/Radio Liberty (RFE/RL), restore staffing levels, and consider new broadcast vehicles;
11. To increase funding for programs in minority languages, including the RFE/RL Tatar and North Caucasus services;
12. To include in US-funded exchange programs students from Tatarstan and other Muslim regions of Russia;
13. To implement a US visa ban and asset freeze against Ramzan Kadirov;
14. To disseminate information on international norms on freedom of religion or belief through the US Embassy in Moscow;
15. To ensure that human rights issues are raised in the context of negotiations on Russian accession to the World Trade Organization;
16. To ensure that the humanitarian crisis in Chechnya becomes an issue raised in US-Russian bilateral relations;
17. To urge that the governments of Germany, Austria, Belgium, Poland, France and Denmark do not accept Kadirov’s “Chechen culture centers”;
18. To urge the Russian government to respect all resolutions of the Parliamentary Assembly of the Council of Europe;
19. To urge the Russian government drop ban of books and newspapers in the List of forbidden literature (Index librorum prohibitorum);
20. To urge Russian government that the Articles 280 and 282 of the Criminal Code are used exclusively in cases involving violence.

The entire report is available HERE.

Lecture by M.Shashani at European Parliament (2005)

University Students in Grozny Under Threat of ...