Our editorial staff received a video via e-mail that shows how mosbters of puppet Kadirov attacks Chechen women without headscarves.

Earlier many foreign media services had reported two dozens attacks made from paintball rifles on girls without headscarves in Chechnya. Local human rights activists has said that gang members of puppet regime (Kadirovskies) are behind these attacks.

“A car carrying men in military uniform slowed down to approach us, one started filming on his mobile phone, and when they sped away we noticed paint all over our clothes,” a woman in the Chechen capital Grozny said on this. Several witnesses told that Kadirovskies, had fired paintball guns at women from cars with tinted windows in multiple incidents this month. In the last ten days 17 girls were attacked only in Grozny and one of the victims of these attacks lost her eye as a result of a paintball shot. 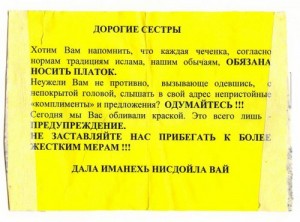 Also in the city of Gudermes, site of puppet Kadirov’s opulent residence, some leaflets appeared on posts near the city bus station and in the vicinity of the marketplace calling Chechen girls to wear headscarves. The leaflets say: “Dear sisters! We want to remind you that every Chechen woman must wear, according to norms and traditions of Islam and our customs, a headscarf. Isn’t it nasty for you, while dressed defiantly, with your head uncovered, hear various obscene ‘compliments’ and proposals? Think again! Today, we poured paint over you. It’s just a warning. Don’t force us to resort to tougher measures!”

Ilyas Matsiev, head of the puppet regime’s press service in Grozny, was surprised at the questions about the incidents in Chechnya: “I hear about it for the first time,” said. Also, so-called “Ombudsman” of national traitors, Nurdi Nukhazhiev said, in his turn, that the attacks were “tricks of radical youngsters”. However, hireling so-called ombudsman has noted that Chechen women and girls should not appear in streets without headscarves. Nukhazhiev said, “It is a custom among Chechens that girls and women should wear headscarves, and men – initially skull-caps and then – sheepskin hats. Therefore, we should respect our traditions. This is my personal opinion”.

Let’s remind you, in recent years in Chechnya girls-students of local higher schools cannot appear at lessons with uncovered heads. Women-employees of puppet regime’s institutions are also obliged to wear headscarves at work and follow a strict dress code.

Here is the video shoots of attacking of Kadirovskies:

Muslim: A Wolf Among “Les Bleus”