The Council of Europe Commissioner for Human Rights, Thomas Hammarberg, published on 15 July his comment about the first death anniversary of Natalya Estemirova and said the guilty of this heinous crime must be brought to justice.

Here the message of the Commissioner for Human Rights:

One year has passed since human rights defender Natalya Estemirova was brutally murdered. On 15 July 2009 she was abducted near her house in Grozny, Chechnya. She was pushed into a car by several assailants and some hours later her body was found in a forest in Ingushetia. She had been shot in the head and chest.

Those guilty of this horrible and cowardly crime are still not brought to justice. This is an unacceptable and dangerous situation.

Natalya Estemirova was one of the leading members of the human rights organisation “Memorial”. Her courage and personal dedication for human rights protection in the Chechen Republic was unique. She had received several international awards for her work, she was for example the first winner of the Anna Politkovskaya Award in 2007.

The brutal assassination provoked widespread condemnation, both nationally and internationally. A year ago I and many others expressed our deep condolences to the family and colleagues of Mrs Estemirova and urged the Russian authorities to carry out an immediate, thorough and impartial investigation with a view to ensure the criminal accountability and punishment of the perpetrators.

I have raised the case with the Russian authorities repeatedly since then, including with President Dmitry Medvedev in January 2010. During my meetings with the federal Investigation Committee in September, December and January I was assured that the investigation would be successfully completed in the near future. The world is still waiting for the results. 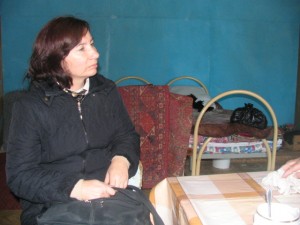 The assassination has a special significance as it prompted serious concerns about the safety for those who work for human rights NGOs in the North Caucasus. During a period following the murder “Memorial” was forced to cease its activities in Chechnya.

Impunity in this case would have a very negative impact upon NGOs’ sense of security and the possibilities for them to work in Chechnya. I can testify that non-governmental monitoring and reporting of human rights are of greatest importance for peaceful development and human rights protection in the region. The need to promote safe and favourable conditions for their work and to provide them with protection, in line with international standards is obvious.

The killing of Natalya Estemirova is a reminder that strong actions are needed to protect activist members of human rights organisations. It is of immense importance that those guilty of this heinous crime are brought to justice – and not only the actual killers, but also those who ordered the assassination.

The Memoriam Activities in the First Anniversary ...