Racist Attacks to Chechens in Poland

During last week there were several racist attacks to Chechen refugees who live in Bialystok city in Podlaskie region of Poland, according to regional version of Gazeta Wyborcza, a Polish newspaper and TVP, the Polish television channel.

The first attack was on the night of September 15 at around 10.40 pm, unknown stoned holigans throwed stones to a flat where Chechen refugees was praying. Assailants knocked to three windows of the flat. One of the Chechens injured in his hand and cheek with shards of the glass. After the attack, holigans fled into the settlement. When a police patrol arrived to crime scene, they called an ambulance for the victim.

At the same day, there was another racist attack against Chechen refugees. Again some unknown people broke a car of one Chechen refugee and threw a kind of incendiary substance inside the car. As a result of the attack, interior of the car was burned.

The following attack was on Wednesday night, September 16 at around 11.00 pm. This time attackers threw petrol bottles to a flat. Luckly there wasn’t any victim. 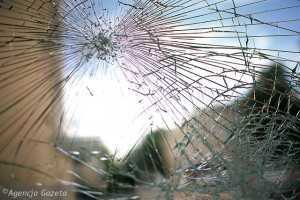 “This month is calling as Ramadan. It is a holy month for Moslem people. We don’t eat or drink something until the evening for God’s sake during the day. So it was a family night and we had invited our Chechen friends to our ground flat at the apartment block. Suddenly we heard screams and someone threw stones from the windows. They were a large group of people who were wearing black masks” said Ali, one of the victim Chechen refugee at racist attack. “We don’t know what we can do. Now owner of the flat explained us he doesn’t want us anymore at his flat. It was very difficult to find this flat. We have to find another flat for rent” added Ali.

Ali is a refugee from Chechnya. He has three brothers. His two young brothers are dependent on Ali’s wife and children. When Russian forces occupied to Chechnya, Ali and his brothers joined to freedom fighters for defending their homeland. One of his brothers was wounded from his leg and shoulder, after stopping the bullet he has trouble with his backbone. His second brother spend one terrible year in a Russian prison, but later he was released after paying of ransom. And his third brother disappeard without a trace in 2002, probably he was kidnapped and killed by Russian forces. So Ali and his family decided to leave from Chechnya. After a long and costly journey, since March 15, 2005, Ali, his wife, children and two brothers live in Poland and gained the refugee status.

The local police department launched an investigation about the attacks. “All the indications of the attacks seems that these weren’t accidents” said Jacek Dobrzynski, the spokesman of the Podlaskie Region Police Department. Police officers checking  what is the background of these racist attacks.

Chechen refugees in Poland have encaountered a lot of attacks, but these ones were the first attack them in the New Town district of Bialystok city. So it is important. These families were attacked, there is no doubt about that, and Chechens don’t feel safe in Bialystok anymore in this reason they ask police to custody.

Members of a Local NGO were Abducted ...