EU must Press Russia on North Caucasus at the Summit

On November 18, the EU and Russia gather in Stockholm for a summit. During last year, the human rights situation in North Caucasus has deteriorated and several human rights defenders have been kidnapped and murdered. EU and the Swedish Presidency must now present harder demands to Russia. The human rights violations must cease and the guilty must be held responsible.

Together with a number of human rights organisations from North Caucasus and international organisations, Civil Rights Defenders have produced concrete recommendations directed to the current Swedish Presidency and the EU on the demands that should be presented to Russia. In a debate article, which is being published in Swedish, European, Russian and American newspapers and sites, the Swedish Presidency and the EU are encouraged to bring increased pressure to bear on Russia. A fundamental demand is that Russia ensures that extrajudicial executions, disappearances, kidnappings and other abuses cease immediately.

“Dialogue is no longer enough. The situation in North Caucasus has become so serious that the EU must take a leading role in pressing Russia to follow its international commitments. The Russian authorities appear unwilling to investigate the human rights violations, and today an atmosphere of impunity permeates the entire region. It must stop,” says Robert Hårdh, Executive Director for Civil Rights Defenders. 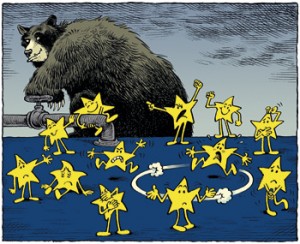 Among the things that the EU and Russia will be discussing is a new partnership and co-operation agreement, which is expected to be momentous document for the political, economic and energy policy cooperation. The organisations demand that the alarming security situation in the Northern Caucasus be a main point on the summit’s agenda and that the following concrete demands are made of Russia:

Russia has been convicted over 115 times in the European Court for extrajudicial executions, disappearances and torture in the Northern Caucasus. The judgements point to the extensive deficiencies in the Russian legal system and an inability to investigate these grave human rights violations. Russia must enforce fully the judgements of the European Court and fulfil its commitments pursuant to the European Convention. The EU should demand that Russia accedes to central international agreements on human rights. This concerns primarily the UN Convention for the Protection of All Persons against Enforced Disappearance, but also protocol 14 to the European Convention, which aims to rationalise the Court’s work, as well as the Rome Statute for the International Criminal Court, which can take legal proceedings against perpetrators of serious human rights violations when the national legal system is unwilling or unable to so do.

“Sweden for a long time has been a strong proponent for democracy and human rights. The Presidency of the EU offers a unique opportunity to show that Sweden and the EU take a serious view of the human rights situation in the Northern Caucasus,” says Robert Hårdh.

Impunity for War Crimes in Chechnya?