Rasul Dzhukaev, a Chechen wrestler has missed out golden medal in 66 kg freestyle category at 2009 World Wrestling Championship in Denmark.

It was the first performance of Rasul Dzhukaev for Russian national team in a world championship and Rasul just missed out on his gold-medal goal, dropping a close 1-0, 1-0 finals decision to Mehdi Tagavi of Iran on September 21 night in the freestyle finals at 66 kg category. Dzhukaev earns a silver medal.

The Danish Wrestling Federation and the city of Herning are hosting the World Wrestling Championship 2009 from the 21st to the 27th of September. The championship is the biggest sports event Denmark has ever held, based on the number of participating countries.

A photo from Semi-final: 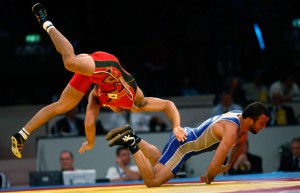 Bob Brown:”Neither Kadirov Nor His Horses Should ...