This is a reconstruction of the story, passed down by word of mouth, of how my ancestor survived our turbulent past, and how history lives on.

A milky mist, clinging to the crowns of the ancient trees, shrouded the mountain village in a blue-grey haze. The cavalary, armed to the teeth, spurred their horses to a gallop and flooded the sleeping settlement with the din of war. Everythinf fused into a blood-drenched nightmare. A ray of morning sunlight trying to break through the thinning mist would have dimmed in horror had it possessed the power vision.

In the midst of that slaughter, among the bodies already growing cold, sat a boy of about four, weeping bitterly and tugging incessantly at his mother’s hair, tangled with clotted blood. His cries were drowned by the groans of the dying. The soldiers had set fire to the village: any harvest crops missed by the flames they hacked down with sabres, so that nothing would remain for any chance survivors.

The previous night, before the attack, Nassipat had dreamt of when she was small and, terror-stricken by a Russian attack, was fleeing with her parents into the forest. That had happened more than once in her childhood. But on this horrific morning, wide awake though she was, fate pro-longed her nightmare. She saw her husband and children being bayoneted before her very eyes. One of her daughter streched out her hands to a soldier, appealing for mercy. Yet he pierced the thin little body with his bayonet, and the child sank to the ground like a sheaf of corn falling to the scythe. Nassipat howled like a wounded beast at this horror, her soul grasping its reality, while her mind willed it to be just part of her dream. Oblivious of her wounds, she struggled to breather life into those dead children. Then she sank into a chasm of unconsciousness.

A child’s heart-rending cry reawakened her. She attempted to open her eyes but her swollen lids would not obet. Forcing them open, she raised her leaden head, but the sight of those torn bodies plunged her once again into the abyss.

The boy’s plaintive wailling dragged her back into the world of the living, the last place she wanted to be. That sound gave her strength, and she crawled towards it. A smoky mist swirled over the village, velling the rising sun. A column of flame soared skywards and the familiar smell of burning cramped her breathing. “The maize crops are on fire – may you burn like that in hell, infields!” she cried. But her curses went unheard. The soldiers had left the village. Anyway Nassipat would have felt no fear – only blind maternal instinct to rescue the weeping child. Stumbling through heaps of corpses, she finally found the half-naked little boy.

The sobbing, dark-eyed lad was trying desperately to rouse his mother. Suddenly he fell silent but, this terror re-kindled, he screamed in anguish. She grasped his hand and staggered towards the familiar forest refuge. 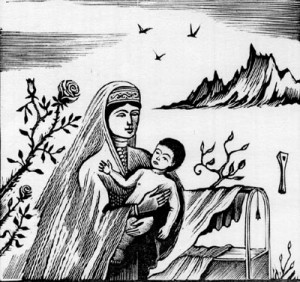 At last she stopped to rest under an ancient beech-tree, whose dense crown shahed them with morning cool. The foliage murmured something secret in the breeze. A brook babbled in the distance. Nassipat alone knew that both were imploring the Almighty tos pare the child. She felt like sobbing out her own grief to Him, but instead, gulping back the lump in her throat, she asked the boy: “What’s your name?”

Reassured by her kindly eyes, he answered: “Salam”.

“Salam”, she repeated softly. “What a fine name!” His mouth, previously convulsed with sobbing, streched into a smile. She clasped him to her, her eyes brimming with tears. Lulled by her warmth, he fell asleep, and Nassipant abandoned herself to memories.

Imperceptibly, night drew in. The moon’s soft glow lit up the mountains. The air smelled of grass. An eagle owl’s be-witching call echoed through the forest. But broken-hearted Nassipat could see only blasphemy in nature’s beauty. Her maternal heart had settled forever in the village that re-mained her family’s resting-place.

A bridge was cast between this day of horror and that far-off day when she had been orphaned, at about the same age as Salam was now.

“Beter that I had died then!” she whispered. “But the Almighty let me survive for this child’s sake.”

She feared neither her solitude nor wild animals. All feelings had grown numb: saving Salam had become her only reason for living. For three days and nights they walked on towards her mother’s relatives’ village. The boy whimpered, begging her to return to his parents, not fully grasping what had happened. Nassipat kept picking young nettles, which stung her hand mercilessly; she ground them and ate them with Salam, to ward of starvation. In bramle thickets she picket the dark, juicy berries and fed them to him.

Evening was drawing in and the mooing cattle, their udders heavy with milk, were returning home, dust billowing in their wake. Only recently, her own cow would have returned in just the same way, but now there was no cow, no village, no family. That lup in her throat was back again, hindering her breathing.

Summoning their kast ounce of strength, they followed the herd into the village.

Nassipat knocked on the woven willow Gates of an old house. In the spacious courtyard, her relative Khalipat was tethering her cow, just back from the pasture. Sensing someone’s presence, she turned round, but could barely recognise the women before her as the Nassipat she had known. Throwing down the cow’s halter, weeping and wailling, she flung her arms around Nassipat, who also gave free rein to her tears. Then, pierced by a searing pain, she fell to the ground, swallowed up bu darkness again. Salam took fright and whimpered softly.

When she regained consciousness, she was lying on a wooden sofa bed, her relatives bustling around her, and Salam settled close by; he would not stir from her side.

“Now that you’ve returned from that world, you will live for a hundred years,” Khalipat rejoiced.

“It clearly isn’t my destiny to die,” Nassipat said softly, her face lighting up as her gaze fell upon Salam.

“You have a remakable little son,” said her hostes. This was no time to speak of those children left behind the massacre. It did her good to her praise of her son.

Every day they were given fresh milk and maize bread. As guests, they occupied the best bed, received the best food, and were shown particular courtesy, while their hosts lay down to sleep on the floor and refrained from eating to leave more for newcomers.

As Nassipat gradually recovered, a seperate house was built for her and Salam, where, as members of Djamirza’s family, they were supplied with all Essentials. Her body retrieved its lost vigour and her cheeks grew pink again; only the fire in her black eyes did not return. And conversation was something she could not endure, giving her a reputation for taciturnity. Although his grief was sometimes visible, he never complained, in proud solitude, like a wolf-cub that had lost its mother. Seeing this, Nassipat’s heart ached, and those dreadful events flashed through her mind again. Everything that remained intact in her injured soul went into rearing her adopted son. Yet she made no show of her boundless affection, fort hat was not customary; boys were brought up according to the strict laws of the mountains.

One evening she was watching from the window as Salam chopped wood. Despite his youth, he already showed the attributes of a grown man. His resolute nature was manifest. He needed to be growing up under male guidance, and the day was approaching when he would leave her. 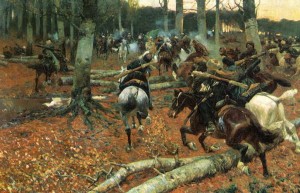 “Soon you shall go over to Djamirza’s house to gather in the crops for seven years,” she said softly. Djamirza was a courageous warrior, often wounded in combat. “I am ready”, answered Salam. He became a serious, responsible boy, like his own father, who had perished on that fateful morning, whose bravery had won him the esteem of his peers – a Chechen’s highest honour. Salam was kind and responsive, but would not pardon an insult; he would fight doggedly if unjustly provoked. At Djamirza’s house he would also be trained from the age of seven as a defender of his Motherland.

Salam prospered under Djamirza’s guidance, a worthy and attentive son to Nassipat, who took pride in his successes and the authority he earned among those around him. At fifteen he joined in fighting against the Russians, although Djamirza was opposed to this, considering him too young. Djamirza’s children became Salam’s own brothers and sisters, and he was much envied for having not one but two adoring mothers and an exemplary father. He married early on his own initiative, but with the support of Djamirza and Nassipat. He considered it his duty to ensure a worhty succession.

Salam dreamed of returning to his native village, but was afraid of giving offence to his adoptive father, Djamirza. Nevertheless he did later return there, and fethered three sons and two daughters. Salam took part in a number of campaigns against the Russians and finally gave his young life in the cause of freedom, in the hope that we, his descendants, would never have to bear the colonial yoke and could live free and equal, as Chechens are born on this earth.

Chekarbiyev’s Students are Champion in Austria