The human rights organization, “the Committee Against Torture” organized a demonstration in the Russian occupied Chechen Republic of Ichkeria’s capital, Grozny on June 24. However, armed thugs from the pro-Russian regime broke the protest up.

According to the press-release from the Committee Against Torture, on June 24, at 12:30 around 40 people, including human rights defenders and ordinary civilians who have suffered from rights violations, gathered in the center of Grozny in honor of “the United Nations International Day in Support of Victims of Torture”. The protesters held pictures of kidnapped people in Chechnya and posters which condemned the unlawful actions of pro-Russian security forces. During the event, many journalists found a chance to speak with human rights defenders and directly with relatives of the victims. However, at the end of the demonstration, one of the Kadyrovites suddenly expressed his dissatisfaction with a poster: “We are against the tyranny of the police,” and demanded the immediate cessation of the event. The most active protesters, who have been directly affected by the pro-Russian regime’s brutality, began to argue with the Kadyrovites. After a short while, the leadership of the pro-Russian forces arrived and described the content of the posters as “public slander”. They then proceeded to threaten the protesters. At this point, the demonstration was stopped and all of the posters were removed. A written explanation was demanded by Supyan Bashanov, head of the Committee Against Torture’s Chechnya branch.

Photos from the event: 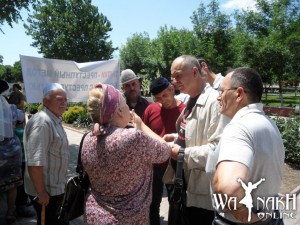 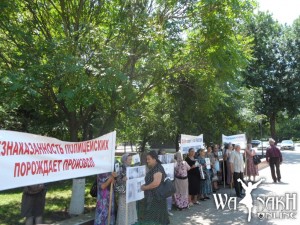 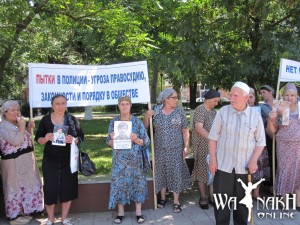 Video from the event:

*Text was translated by Waynakh Online and edited by Michael Capobianco