According to Gazeta Wyborcza Radom and Echo Dnia a refugee camp in Radom was attacked by drunk Poles on Saturday night. Fortunately noone was hurt.

A group of young Poles (around 60-70 people) with hood on their heads have thrown stones at the camp building. Four windows were broken. Police arrested nine of them. They were questioned and released.

The police has different point of view. Mr Rafal Jezyk, spokesman of Radom police office, says the attack must have been connected with other incident. Three Poles were bitten by a group of Chechens in Planty area of Radom on last week. The police is working on those two cases right now. 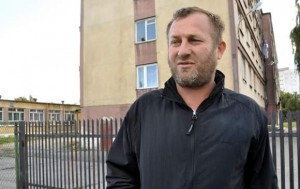 Chechens claim the attack was a political one, as according to Mr Musa Nugayev, Poles were shouting “Poland is for Polish people only” and “Go home”. He also says that it took a lot of time for the police to come so they had to defend themselves. This is why they left the camp with knives in their hands just to scare drunk Poles. Many of them run away. A witness who lives close to the camp confirmed that Chechens had knives but he did not see any fight. He also complaint that Chechens were not good neibourghs, there were a lot of problems with them and this incident wasn’t the first one.

What’s interesting there is one more point of view. Mrs Ewa Piechota, who works for Office for Foreigners says she was told by Chechens that Poles came to the camp looking for a man who has already left the place and they just threw some stones.

It is interesting that there are three different stories made out of one incident. This shows that “the Chechen problem” becomes a real problem in Poland and sooner than later it will turn into political matter (there will be a presidential elections next year). This catholic and mostly conservative country has not learnt yet that all people coming here are bringing something very precious – their culture and experience that can make one only richer.

On the other hand Polish government has no idea what to do with refugees. The refugee camps are building a wall between refugees and Poles. Integration programmes are a comedy, actually very sad comedy. Financial support is a sort of symbolic. Without help from Polish people it is almost impossible for a Chechen person to find a flat or a job. Will it change? Well… it’s hard to say especially when one looks at racist attacks targeted at people from Africa for example, even those who are playing for Polish football or basketball teams.

During last thirty days, the other big racist attacks against Chechens in Poland which we have published:

Racist Attacks to Chechens in Poland

Hundreds Rally in Moscow for Memory of ...