At night on January 7, in the Urus-Martan district of Chechnya, which is still under the counter-terrorist operation (CTO) regime, unknown armed people set on fire two small shops, which provoked fire in a number of kiosks located nearby. Kavkaz-Uzel correspondent learnt about it from residents of the village of Gekhi, where the incident took place.

“Late at night on January 7, armed people in military uniform, looking like Kadirovskies (gang members of puppet Kadirov), arrived at the village. They set on fire two small grocery shops, located in the central part of Gekhi, saying that alcohol was illegally sold 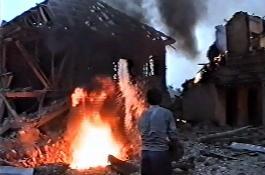 there. They forbade fighting the fire, and even forced the firemen, who came to the venue, out. Meanwhile, the flame caught a number of small kiosks and trading booths located nearby, having burnt down about 15 of them,” Usman, a Gekhi villager, asserts.

Some locals believe that the reason of the arson was illegal trade in strong drinks, while others think that it was a sort of vengeance for unwillingness of the owners of these shops to pay bribes to Kadirovskies.

Two Civilians were Abducted in Chechnya