Today is “Victory Day” of Chechen nation. It is an important historical anniversary of “Operation Djihad” of Armed Forces of Chechen Republic Ichkeria that forced invader Russian forces to left from the Chechnya’s territory in 1996.

During the early months of 1996 the invader Russian forces – under the programme called “peace and concord” – conducted a very violent campaign against Chechen towns and villages trying to shell them into submission and – often – payments to the local Russian commanders. Drunk Boris Yeltsin had elected as President of Russian Federation for a second term and he was mentioning that the war in Chechnya is over, it is a absolute victory of Russian forces. But, on 6 August 1996, our hero warriors re-captured Grozny from the dirty hands of Russian occupiers and the period has started which will give an end to first Russian-Chechen war with our victory. Beginning on 3 August, small, light foot-mobile Chechen groups belongs to Armed Forces of Chechen Republic Ichkeria under command of Chieff of General Staff Aslan Maskhadov, began infiltrating the city in preparation for the assault. By daylight on the 6th our fighters had infiltrated around 820 and proceeded to conduct a simultaneous offense at 5 a.m. throughout the city. It estimates that there were more than 15,000 Russian troops were in Grozny at the time. The four main objectives of our fighters were the Russian command and control assets at Khankala airfield, the northern airport, The FSB (KGB successor) headquarter, and the GRU (military intelligence) headquarter. To prevent reinforcement and/or relief of Russian invader forces in Grozny, Chechen freedom fighters conducted supporting attacks and manned blocking positions in four surrounding urban areas, along the three main avenues of approach into Grozny, and to the north of the city. These operations were conducted simultaneously with the main attack in order to create maximum confusion amongst the Russian military leadership. In this, our fighters were very successful. The main attack in Grozny was over in three hours. During the attack and immediately after Chechen forces had no problem with re-supply as the Russians were so completely caught off-guard that our fighters seized massive amounts of weapons and ammunition as well as vehicles to transport the captured material. In the same hours, Russian invader troops in Argun and Gudermes were also surrounded in their garrisons by our warriors. And during the operation, Aslan Maskhadov told to a Moscow based radio station: “The actions in Grozny have a single aim – to show that the war in Chechnya is not over yet”. Indeed, heavy fighting which started on August 6, didn’t stop until August 22. And then, Russia accepted that they were defeated in Chechnya and left from our terrority. 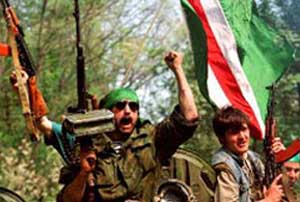 “By June 1996 we were under attack on all fronts in a last desperate attempt by the Russians to gain the upper hand. We were surrounded with our backs to the mountains and under constant fire by artillery and aviation. On 9 June after a series of harrowing escapes by many in the Chechen command structure it was clear that there was no hope for a negotiated peace. It was then that we decided to recapture Grozny. I had been planning this operation for 6 months, as we always believed that the war would end with the recapture of Grozny. I thought about it constantly, even to the point of conducting radio rehearsals to provoke a Russian reaction. I had studied the maps, the Russian positions, the approaches, the routes of advance; I had everything ready. We held meetings with our commanders who gave us their intelligence reports. We had reconnoitered every inch, we knew the disposition of every Russian position, the numbers, the roadblocks, everything. On 3 August I gave the order to move into the city. At the time the Russians were everywhere so we moved between their positions from every direction. Amazingly, on 5 August the Russian media announced that the Chechens would enter that very same day. I was worried as there were certain areas where it would be easy to ambush our troops, but it was too late to stop the attack. The attack began at 0500 on 6 August. Over 820 men took part in the operations. I gave an order that every commander should lead with his men, whether he had 20 or 200, they had to be in the forefront. All our objectives were met and it was a huge success. The Russian posts, bases, all of them were hit by surprise; then our forces moved on to cut the roads and not let anyone through, leaving behind a few snipers and machine gunners to cover the objectives. When Russian columns tried to move into the city it was too late. All the bases were captured or neutralized. As we could not take the government building or the MVD we simply burned them…”

Terror Against Civilians Increases In Chechnya